Stevia Benefits, Side Effects, Best Brand and Why It’s So Good as a Sugar Substitute 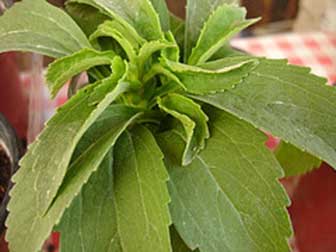 Starting to use stevia regularly may well be one of the most beneficial things you ever do for your wellness and well-being.

Not for the nutrition it gives you, but rather for what it helps you substitute in your diet — sugar.

Here’s why stevia is so much better as a sweetener than sugar, the many benefits of making the change, potential side effects and the best tasting brand I’ve found to sweeten food and drinks.

Contents
1. What is Stevia?
2. Stevia for Weight Loss
3. Dental Care and Preventing Tooth Decay
4. How to Use Stevia
5. Potential Side Effects and Allergy Symptoms
6. The Best Tasting Brand

Stevia, known scientifically as Stevia rebaudiana, is a small herb that originated in South America. Its leaves contain unusual compounds, like steviol glycoside and rebaudioside-A, that mimic the sweetness of sugar without any of its negative effects.

Raw stevia leaf is around 40 times sweeter than regular table sugar. While a good concentrated organic extract, like this organic one I use in my kitchen, is approximately 200 times more sweet.

The leaves of this plant have been used to sweeten foods and drinks for more than 400 years in South America. In countries like Japan, South Korea and Taiwan, stevia products have been popular for decades with very few reported side effects.

Purified stevia glycoside extracts have been generally recognized as safe in the United States since 2008. However, whole stevia leaf powders and other products do not have GRAS status and are not approved by FDA as a food additive.

The main reason why taking stevia is so good for your body and overall wellness and well-being is because it helps replace destructive sugar as a sweetener.

A high dietary intake of glucose, fructose and especially HFCS, increases your risk of many diseases and makes weight management extremely difficult.

Due to its extreme sweetness, just one drop of this concentrated extract I use in my kitchen is equivalent to a teaspoon of sugar, with no calories to store as fat and no negative effects on your blood glucose levels. 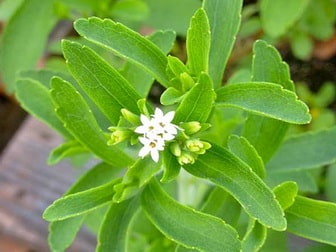 Sugar is particularly bad for cavities and gum disease so swapping it out with stevia extract is especially beneficial for your teeth.

How to Use Stevia

The most obvious and immediate use for stevia is as a substitute sweetener in hot drinks like coffee or tea.

The extract is heat stable up to 392 degrees Fahrenheit (200 degrees Celsius) and a single drop is usually enough. Those who love their sweetness could try two or even three drops but you shouldn’t need any more than this.

Cold drinks can also be sweetened with stevia. Add a drop of the extract for extra sweetness without the calories.

A couple of drops mixed into a homemade muesli recipe removes any need for any other sweeteners. It can also be used in most forms of baking and other food recipes that call for extra sweetness.

I’d be interested to read in the comments other good ways you’ve found to cook with stevia and use it as a replacement for sugar.

Potential Side Effects and Allergy Symptoms

Refined stevia extracts with rebaudioside-A have GRAS status and are considered safe for moderate use as a sweetener during pregnancy.

The FDA notes that whole leaf stevia products are not generally recognized as safe and therefore not recommended for use by pregnant or breastfeeding women.

Some stevia products also use sugar alcohols as an ingredient which may cause digestive upsets like bloating and gas and should be avoided. 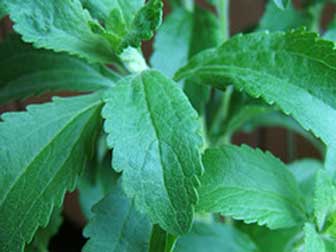 A very small number of people have reported a possible allergic reaction to stevia. Symptoms may include:

Consult a doctor if these symptoms are severe or worsen over time. People who report an allergy to stevia are also usually allergic to other plants in the ragweed family, of which stevia is a member.

For the vast majority of people though, stevia allergy is extremely rare and using it is a safe and very beneficial way to cut down on their simple carbohydrate intake.

Some negative reactions attributed as stevia side effects, like brain fog and headaches, are more likely to be caused by candida die off.

When you replace sugar in your diet with stevia you may temporarily feel worse as destructive candida is being starved of its favorite food. This can increase sugar cravings but you’ll improve your wellness and well-being in the long run if you can get through them.

It’s important to keep cortisol and stress levels in check to reduce cravings for sugary foods and drinks.

This stress relieving Organifi Gold superfood powder can reduce stress and tension and help you get a better night’s sleep. This leads to lower cortisol and more effective weight loss.

Early versions of stevia apparently had problems with a bitter aftertaste. This is uncommon in extracts these days and I’ve never experienced it personally.

When researching a good tasting brand to buy for my own kitchen I read many customer reviews and tried around half a dozen versions before settling on this popular organic concentrate.

It’s one of the least expensive ones but I like the long lasting sweetness of it in my teas or mixed into my food more than any of the others I’ve tried.

Do you use stevia in your kitchen and have you found your simple carbohydrate intake cutting down since you started substituting sugar with it?

The long term benefits can be dramatic for such a simple and inexpensive change and if you’ve never used it before I’d highly recommend giving stevia a try.