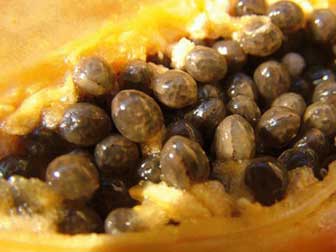 Scientists are still working on male birth control designed to block the release of fertile sperm and prevent unwanted pregnancy.

So far many of the attempted methods appear to lead to testosterone problems and decreased libido.

There are, however, some potential natural methods of birth control without such side effects. One of the most interesting is using papaya seeds for male contraception.

Ahead is what we know about using the seeds of papaya as a contraceptive for men, potential precautions and the simplest and best tasting way to add the seeds to your diet.

Contents
1. Papaya Seeds as Birth Control in Traditional Cultures
2. Research Studies
3. A Natural Male Contraceptive
4. Preparing the Seeds for Regular Use
5. How to Harvest and Store the Seeds
6. A Simple Smoothie for Natural Male Birth Control
7. Treatment Time and Final Thoughts

Both men and women on the Indian subcontinent and in parts of Southeast Asia have traditionally used the papaya fruit and its seeds as a form of natural birth control.

Both unripe papaya and its seeds are high in papain. This enzyme aids protein digestion but is best avoided for women who are currently, or trying to get pregnant.

Much more on possible side effects of papaya enzymes here for both men and women.

Papaya seeds are also reported to have been used by men in India, Sri Lanka, Pakistan and other parts of Asia as a long-term natural birth control method.

The equivalent of around a teaspoon is suggested daily and is taken for 3 months to be fully effective.

The effect is then said to last for several months after treatment is stopped, to be completely reversible in the long-term and with no observed negative effects on libido during treatment.

Two scientific studies on the contraceptive effects of papaya seeds shed more light on their potential.

As is often the case with natural treatments, there hasn’t been a wealth of scientific studies on alternative birth control methods. Companies can’t patent plant-based treatments so there’s little financial incentive for research.

Two promising animal studies have been done though on the effects of taking a papaya seed extract on male sperm.

The first on Pubmed is a study of the long-term safety of a Carica papaya seed extract on male rats over a full year of daily doses.

In this research, while sperm became completely ineffective during the treatment, no decrease in testosterone or damage to internal organs was observed compared to the control animals.

The researchers said the extract “affect sperm parameters without adverse side effects and is clinically safe as a male contraceptive”.

While rat studies are often used to test the safety of a substance, men are not rats. This second study though, involving adult male langur monkeys is significantly closer to our own biology.

In it an extract of papaya seeds, equivalent to 50 mg per kilogram of body weight per day, was administered for 360 days.

Testing found sperm concentration, motility and viability notably decreased within 30 days and was significantly impaired by 60. After 90 days azoospermia (no sperm count) was observed in all the test subjects.

Once treatment was withdrawn, sperm function slowly increased and returned to the fertile range after 150 days with no noted long-term side effects.

The study concluded that the year-long administration of papaya seed extract “disclose no significant toxicological effects and the serum testosterone level was not affected”. 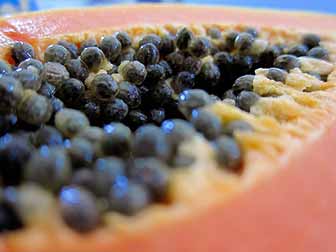 Despite the findings of these studies, we are unlikely to see a papaya seed based male birth control product anytime soon.

Any man interested in using the seeds to decrease his fertility would have to do it with the seeds from papaya fruit and at his own (and his partner’s) understanding and risk.

You’d also need a good supply of papaya seeds to use. Fortunately, they can be frozen for bulk use and easily added to the simple smoothie ahead.

For people that don’t have access to fresh fruit and their seeds, this high quality powder is the best alternative. You’d only need about half a teaspoon per dose due to the seeds already being concentrated in powdered form.

Taking papaya seed powder has many benefits so there can be significant additional reasons for using it alongside preventing unwanted pregnancy.

Eating papaya seeds is good for digestion, detoxification, bad bacteria and yeasts. They have even been shown to be an effective treatment for parasites and intestinal worms.

Ultimately, the choice is up to each male reader individually. I’ve personally used the seeds daily for long periods, primarily for the digestive benefits, but also as extra insurance against unplanned pregnancy, and noticed only positive effects.

I’ve also been tested myself several times at clinics with the same results as in the research studies. Though there’s no way to guarantee that using papaya seeds as a natural contraceptive would be 100% effective.

The noted studies and observations from traditional uses make it one of the best candidates for natural birth control, but each man would need to consider his own and his partner’s situation.

If you’re interested in using the treatment then here is how to prepare a consistent supply of papaya seeds. Following this is a simple way to take them daily in a great tasting smoothie.

Preparing the Seeds for Regular Use

Papaya seeds taste very different to the delicious fresh fruit. The flavor could be described as a cross between pepper and wasabi.

Just chewing up a teaspoon of the seeds each morning isn’t that much fun so here is a more enjoyable way to have them without the strong taste.

To be effective the seeds need to be chewed up, crushed or broken apart in some way. Given this, I always have the seeds blended into my daily smoothies when taking them.

You’ll need a high powered blender to chop them up finely so you won’t even notice them in your smoothie. After a lot of research I chose this one and it’s perfect for the purpose.

Unless you live in an area where papayas are freely available you’ll probably want to freeze a supply for regular use.

Fortunately, the large Central and South American papayas available in America contain a lot of seeds (and are not affected by the GMO issues of the smaller Hawaiian fruits).

The best way I’ve found to ensure a consistent supply is to get a couple of large ripe fruits, cut them into strips with the seeds and freeze them. Here’s how.

How to Harvest and Store the Seeds

Chopping up a couple of papayas like this is a little work at the start, but once you’ve done this with a big fruit you should have enough seed laden strips for several weeks.

They can then be used from the freezer and added, still frozen, directly to your smoothie. Unless you have the powdered seeds, this is the best way I’ve found to have a daily supply for regular use. 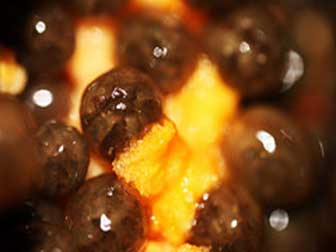 The langur monkey research observed a reduction in sperm viability with papaya seed after 30 days, significant decreases by 60 days and ‘no sperm count’ after 90. The scientists said it provided a further 150 days of male contraception once the papaya seed treatment was stopped.

Given this, papaya seeds may be useful as a long-term natural contraceptive for men worried about unwanted pregnancy. Though you would need regular access to the seeds and the commitment to take them daily.

I’d also highly advise testing your sperm count before relying on this method. Inexpensive home fertility tests like this are now available for men and are well worth it for something so important.

It’s not the place or purpose of this article to make the decision as to whether to use papaya seeds as a natural male birth control for anyone.

Commonly used barrier methods like condoms are simpler, but in situations where these are causing problems, such as a latex allergy, this natural method could provide an alternative.

It’s a choice for each man to make individually, after researching the options available, but no method should be considered 100% effective.

Do you have any experience with using papaya seeds as a natural contraceptive?

I’d be interested to hear from men who have used the seeds for this purpose, how they found taking them regularly, and particularly if they have had their sperm count tested after using this homemade birth control method.

If you’re interested in other reasons to take the seeds for better health then read this article on papaya seeds benefits for your liver, digestive system, bacterial infections and much more.

Best Superfood Blends | Back to the Homepage