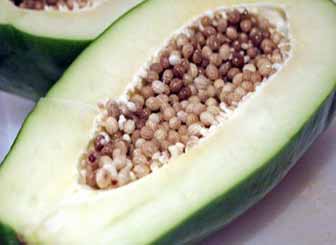 Papaya fruit is a rich source of proteolytic enzymes like papain that aid in the digestive process. This is especially true of meals that contain meat or other concentrated forms of protein.

However, as this article will explain, supplemental papaya enzymes can be even more beneficial when taken on an empty stomach.

Contents
1. Protein Digestion and Papaya Enzymes
2. What is Papain and What Does It Do?
3. Beneficial Effects of Papain Enzymes
4. Why Green Papaya is Better for Digestion
5. Taking Enzymes on an Empty Stomach

Many of us eat large amounts of low quality meat each week. This can put a heavy strain on our digestive systems, especially the enzyme producing pancreas.

Rushed meals, extra large serving sizes, low digestive enzymes and poor stomach acid production all contribute to this meat being only partially digested by the time it reaches the lower intestine.

Here it can putrefy as it is acted upon by masses of flatulence causing bacteria. But smelly gas is the least of the potential problems caused by undigested protein in the colon.

The place to fix flatulence, and other more serious issues associated with poor digestion, is not at the end of the process in the colon, but at the beginning.

Proper chewing is important and can significantly assist carbohydrate digestion in particular. Protein is more difficult to break down though. Here’s where proteolytic enzymes, like the papain in papaya, can really help.

What is Papain and What Does It Do?

The term proteolytic means protein digesting. Papain is recognized as one of the most effective proteolytic enzymes at breaking down meat and other proteins.

It is considered superior to the enzyme pepsin that we produce in our pancreas, and is commonly used in scientific cell isolation procedures. It is also used commercially as a meat tenderizer.

Papain works by cleaving the peptide bonds of complex proteins, breaking them down to their individual amino acids. This process makes them ready for use in the growth and repair of your body.

Introducing green papaya enzymes, like these high strength and organic ones I take, into a meal containing meat can significantly speed up its digestion.

It can also help with the breakdown of other ‘troublesome’ proteins, such as the gluten in wheat and the casein in milk. 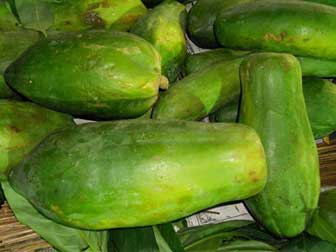 Some people suggest that papain, and other plant based proteolytic enzymes like bromelain, are destroyed by hydrochloric acid in the stomach and see no value in them.

However, many nutritional experts say that while papain may be rendered inactive with high levels of stomach acid, it would continue working again once it passes through to the alkaline environment of the small intestine.

There is also a period, sometimes as long as an hour, between when food is first eaten and when large amounts of hydrochloric acid is produced.

During this time salivary enzymes, and any plant-based enzymes in the food (or taken with it), begin the process of digestion. Within this period the addition of papain into a meal can greatly increase protein breakdown.

Additionally, since papaya as a soft fruit doesn’t require much digestion itself, some of its enzymes move into the small intestine before large amounts of stomach acid is produced.

Once in your intestines, papain and other papaya enzymes can help clear undigested protein-based debris and waste products.

Aside from reducing bloating and flatulence issues, proteolytic enzymes may also aid in more serious digestive conditions and aid in preventing constipation.

Why Green Papaya is Better for Digestion

Green papaya fruit contains significantly more papain enzymes than those that are fully ripened. That said, perhaps with the exception of green papaya salad, it’s not as appetizing for most people.

Bright orange fruits, aside from tasting sweeter, also contain more antioxidants and vitamins and have many other papaya benefits.

As a compromise, I personally use papayas that are just ripening but still have some green on them. I’ll also use sections of fully green papaya in digestive and anti-parasite smoothies.

A potent alternative to eating unripe papayas are green papaya supplements. These can be taken with any meal high in protein and are a convenient way to improve your digestion, and potentially avoid intestinal problems later on.

Taking Enzymes on an Empty Stomach

While green papaya enzymes are most often taken with food, another strategy that is gaining popularity is to have them blended up in a smoothie or with water on an empty stomach.

Under these circumstances little hydrochloric acid is produced and the papain enzymes can pass into the small intestine unimpeded.

From here they can be absorbed into your bloodstream where they exert an anti-inflammatory effect throughout the body.

The protein digesting enzymes from papaya are generally recognized as safe and well tolerated when used internally. Despite their many benefits, there are some precautions and a few potential papain side effects to be aware of which will be covered next.

Have you used green papaya enzymes before to improve digestive function or reduce inflammation?

These high strength and organic capsules are the best way to take green papaya fruit that I’ve found. They can be taken with a protein meal to improve digestion, or alternatively on an empty stomach as a proteolytic enzyme supplement.